Gong Xi Fa Cai or Gong Hey Fat Choi! These terms all loosely translates to “Congratulations and Be Prosperous”.

Today begins the Lunar New Year in the Chinese calendar. It is traditionally celebrated for fifteen days, from New Year’s Eve to the Lantern Festival. There are so many customs and traditions involved during Chinese New Year along with myths and superstitious beliefs.

In Dallas (Texas), there aren’t many Chinese New Year festivals found, compared to other cities that have large Chinatowns such as in San Francisco or New York City. But our family has casually started celebrating and practicing some of its customs and traditions for about a few years now.

Yesterday, I went to our local Asian store and bought red paper cut-out decorations to hang on our door. I interrogated a young Chinese woman who was looking at the paper cut-outs and red packets (envelopes) next to me. I asked what each character meant. She told me I can’t go wrong with any of them since they all represent good luck and good fortune.

I also purchased red envelopes to put money in for the two boys.

This morning the boys were excited to see money inside their red envelope. The amount of money must be given in even numbers, and the luckiest numbers are 8 and 6. Never give money amounting to odd numbers such as 3 or 5 as this represents funeral. Also, the number 4 is bad luck as it means “death” in Chinese character. I gave $10 each because I didn’t have change last night. I would’ve preferred to have given $8 or $6. I need to be better prepared next time.

Last night I also made sure our house was thoroughly cleaned with the belief that a clean house will sweep away ill-fortune and to give way to incoming good luck.

In the past years, I have prepared noodles for longevity, 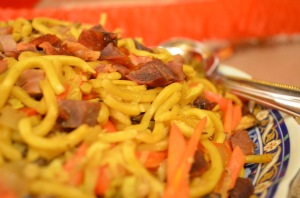 shrimp for wealth and abundance, 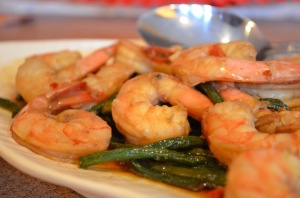 and dumplings for prosperity. 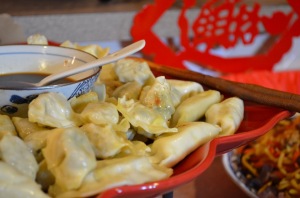 This year, I will add spring rolls because the shape represents “gold bars” and perhaps a whole chicken. I haven’t prepared a whole steamed fish yet since I really don’t think the fish they sell at the stores here are very fresh. Perhaps someday…

If you are visiting someone, don’t forget to bring tangerines or oranges to wish them good fortune. Tangerine in Chinese sounds similar to “luck’ and orange sounds “wealth”. The bright orange color of the fruits symbolizes “gold”.

This year is the Year of the Goat/Sheep/Ram. It is believed to be a year of tranquility and stability. I was born in the Year of the Sheep. I am hoping that the lunar Chinese calendar will bring me better luck than the traditional new year we all celebrate (January1st). Because on the first day of January, I found out my dad fell sick and eventually passed two weeks later so I am excited to rid of all that ill-fortune I had in the beginning of 2015.

Good luck to you all! May the Chinese New Year bring you good fortune, prosperity, and most important of all, good health!