When I think of Casablanca, I think of romance, lost and reunited loves, the adversities of war, jazz cafes (especially one named Rick), and of course the movie Casablanca (which by the way remains as one of the most popular films of all time). “Here’s looking at you kid,” the most quoted line from the movie, had been used a million times when referring to Casa (as the locals call their city). But oddly enough, this unromantic phrase became one of the most romantic lines in movie history hence the amorous prenotion that alludes to Casablanca. I hate to shatter the illusion but this industrial city is far from romantic. There’s not much in the city that reflects the expression of love. Except of course, Hassan II Mosque, where its grandeur beauty impresses even the most pragmatic person. And…..oddly enough, Rick’s Cafe, founded by an American woman based on her love for the movie.

When we first arrived in the city, I was unimpressed with what I saw and quite relieved we weren’t spending more than one night there. Unfinished constructions and old dilapidated buildings were everywhere, not to mention the awful traffic! And as prevalent in cosmopolitan and international cities, the people in Casablanca weren’t as warm as the people in Chefchaouen or even Fez. Despite it all, it was still in my list of must see and do. It is after all one of Morocco’s most famous cities. 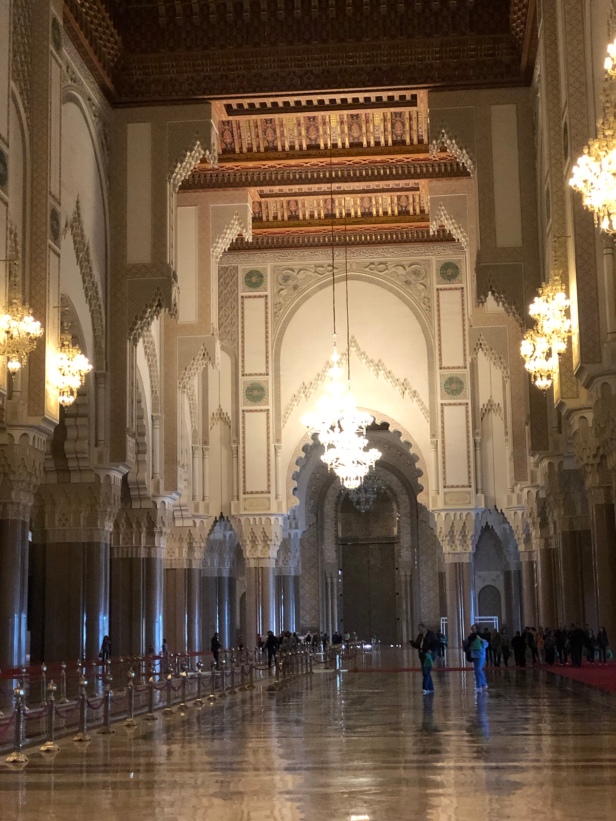 I only had two main reasons to be in Casablanca. First, to see the largest mosque in Africa, the Hassan II Mosque. There are daily tours for non-Muslims but very limited on Fridays (Friday is the worship day for Muslims). We arrived in Casablanca from Fez on a Friday but I made sure with our driver, Saíd, that he’d get us there in time for the last tour. The day before arriving in Casablanca, our travel agent informed us that we have been upgraded to a different hotel since our original hotel was having problems. I was so glad to find out we were going to stay at Sofitel Hotel. But when we got there, the hotel notified us they only had a room with a king sized bed available. After raising hell to give us a room with two beds, they finally gave in. I was upset that this setback might have caused us to be late and miss the last tour at the mosque. We dropped our bags in our room and immediately drove there.

Arriving at the mosque, I was awestruck by this massive architectural marvel. This is by far the most impressive mosque I’ve ever laid my eyes on. And fortunately for us, this is one in two mosques in Morocco that allows non-Muslims to enter the premises. We purchased our tickets and followed the English language tour guide towards the entrance. They gave us a plastic bag for our shoes before we could proceed. It was just as impressive inside as it was outside of the mosque. The work of art is spectacular, massive chandeliers hung above the intricately designed ceilings, and the floors were made with marble. This mosque is partially built over the ocean and can allow 25,000 worshippers inside (and another 80,000 outside). The minaret stands as the second tallest in the world. A minaret is a visual cue to a Muslim community serving as the symbol of Islam and to perform the call to prayer (thanks, Wikipedia!). 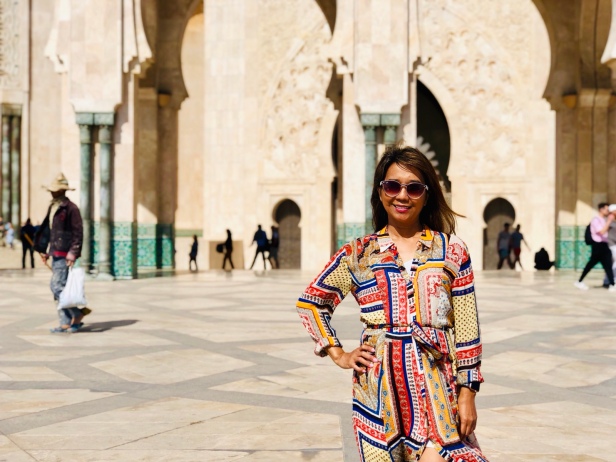 After the tour, Saíd took us to a coffee shop in the corniche. I sat there sipping my mint tea and thinking the ambience could be a lot more beautiful but everything around me seemed dated. After touring Hassan II Mosque, there was not much else to do for tourists. Fortunately, I was still excited about one thing: dinner at Rick’s Cafe. 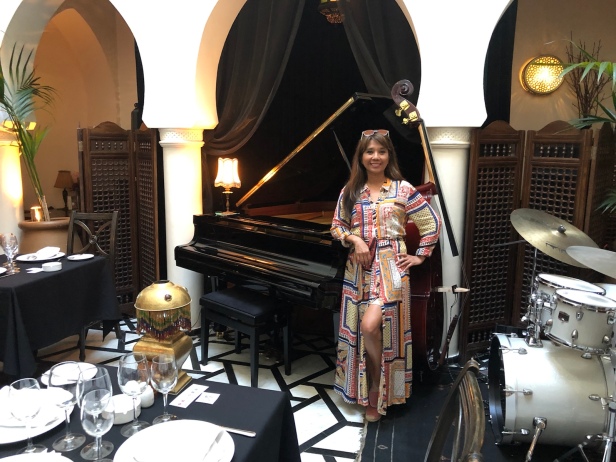 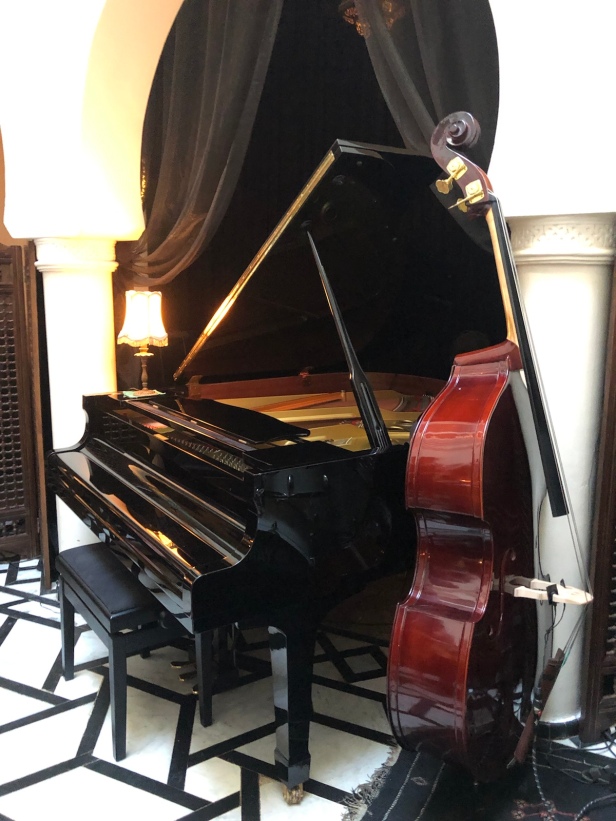 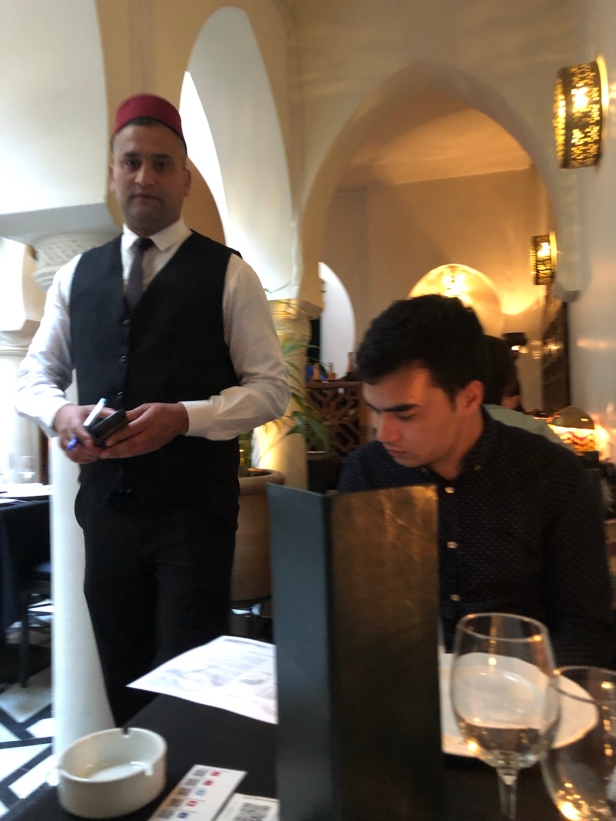 How could anyone miss Rick’s Cafe in Casablanca? It is after all the main location for most of the action that took place in the movie. But believe it or not, Rick’s Cafe was a fictitious place and had never actually existed. If you didn’t know, the movie was filmed in the Warner Bros. Studio in California and not in Morocco, therefore, Rick’s Cafe was just a Hollywood fantasy. But a former American diplomat in Morocco by the name of Kathy Kriger decided to recreate the cafe. It was opened in 2004 exactly as it was portrayed in the movie. I made a reservation via email months in advance to make sure we get a table on the night we were there. When we got there, there was a long line of tourists waiting to enter inside. Two or three men stood in front of the restaurant to manage the reservations. Fortunately, we were called to go in after a few minutes of waiting.

Since we were in Casablanca, where the seafood is known to be delicious, I decided to take a break from the chicken tagine I’ve been eating the past three days. I ordered shrimp for appetizer and seabass for my main entree. I also tried the local beer Casablanca. Rick’s Cafe, albeit touristy, was not only a fun place to be but I was equally impressed with the quality of the food. I stood next to the piano envisioning the romantic setting in the movie when Humphrey Bogart asked Sam, the piano player, to play As Time Goes By, the song that reminded Rick of Ilsa during their love affair in Paris. I went to the bar and caught a reflection of me. I stood there thinking to myself if this was in the movies, I would end my day in Casablanca by having a toast, raise the bottle of beer and tell myself, “Here’s looking at you kid! You made it to Casablanca!”

Oh wait…I actually did that! 😉 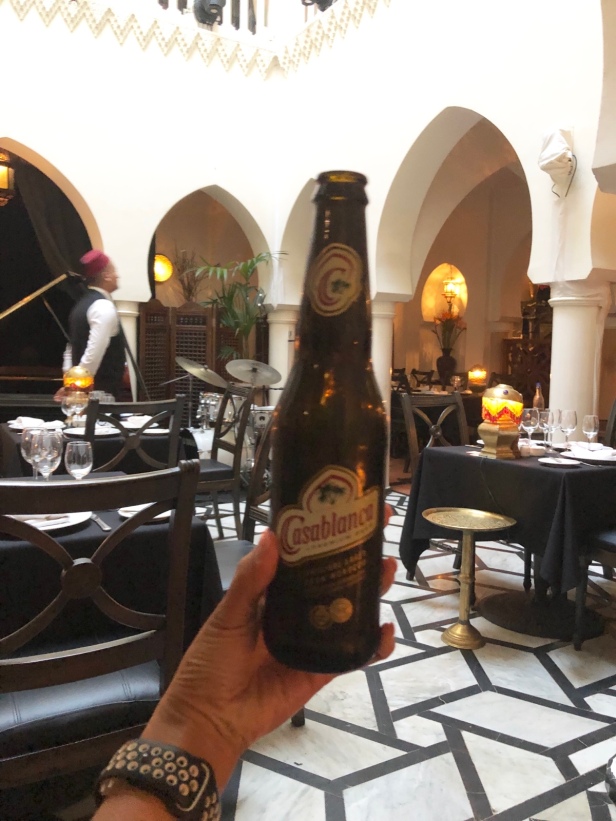